This morning, I made pancakes for breakfast. The blog from which I adapted the recipe also included a nutritional facts box, and while nomming on the pancakes, I got the idea of comparing the nutritional content to some standard American pancakes. To be nice, I chose the healthy option at IHOP: their Harvest grain n nut pancakes.

First: the ones I made, last: IHOP. 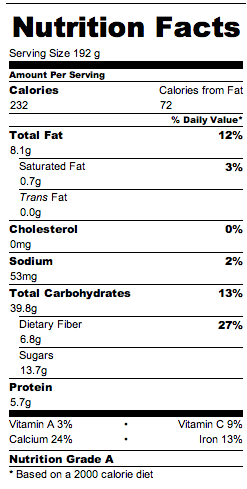 You might say, that well, even after doubling the healthy recipe, the IHOP pancakes have much more protein, and protein is good. Yes, but, relative to their other content, no. Besides, most people get more than enough protein in a day.

I wouldn’t rob you of the recipe, which is adapted from this blog. What is noteworthy, is that they’re gluten free. I personally find that, even though I don’t have celiac disease, that I feel much better if I exclude gluten from my diet. It’s difficult to find anything to eat when you’re out and about if you require it to be both vegan and gluten free though, but I have great expectations for options when I go back to the States over the summer. Anyway, recipe!

-> mix and let sit while you make the buckwheat flour!

Add to the wet mix, and lastly add about 1 dl raspberries. Works well if they’re frozen, as it’s hard to fry water.

I served them with apple sauce which was great 🙂

Get your health fixes as RSS!

There was an error retrieving images from Instagram. An attempt will be remade in a few minutes.